In this volume, I would like to talk a little about microcomputers with Bluetooth functionality. The microcomputers we will cover today are also designed for data collection in edge AI systems.

In volume 13, I gave a brief overview of the microcomputer. In this issue, we will continue this discussion using three sample programs that run on Silicon Labs’ BGM220 Bluetooth Module Wireless Starter Kit [2][3].

First, let’s look at the starter kit that was used. The Silicon Labs BGM220P development board from the Wireless Gecko Module Starter Kit comes equipped with the following hardware shown in Figure 1:

Both (2) and (3) are Bluetooth MCUs, and either can be connected to the Main board shown on the left of Figure 1. Setup is very easy, and you can begin development immediately by connecting the Main board’s USB mini connector to the Windows PC USB board using the USB Type-A to Mini-B cable. For the projects that follow, (4) and (6) will not be used.

Moving on to the software side of things, we used Simplicity Studio 5 as our software development tool (SDK). This software, developed by Silicon Labs, can be downloaded from their website free of charge [5].  Simplicity Studio 5 is a powerful tool that includes an Advanced Energy Monitor (AEM) function, which can measure the current consumption and supply voltage of the Bluetooth microcontroller [13]. This was necessary for the projects that I will soon explain.

For step 3, click the [EXAMPLE PRODUCTS DEMOS] tab (Figure 3) to see a list of projects that are compatible with the development board. After finding [Bluetooth SoC Blinky], click [CREATE], and the Project Configuration window will appear (Figure 3). The last step is to enter the Project Name that will serve as the folder name for the project on your local PC. With everything done, click the [FINISH] button in the lower right corner to download all of the necessary files to your PC.

Step 4 involves selecting the folder we previously named from the Project Explorer on the left side of Simplicity Studio (Figure 4, left). Next, right-click on the [Run] button and move the cursor to the [Profile As] tab in the pull-down menu and click [Simplicity Energy Profiler Traget] (Figure 4, left). This will then start the project generation. The progress is shown in the CDT Build Console in the lower right of the screen (Figure 4, right). The generated binary program will be written into the target device (BGM220P), and the execution will start automatically after resetting.

One important thing to note is that except for the action of inputting the Project name, the sample project creation and execution can only be performed by mouse operation. Additionally, the main parameters for Bluetooth communication, such as the advertising interval, can be changed through the configurator in simplicity studio 5. It is also possible to edit the C++ source programs directly, but that is beyond the scope of this experiment.

Figure 5 shows the experimental apparatus that was used for today’s experiments. The development board from figure 1 is often called a peripheral, so this is what I will refer to it as for the remainder of this article. Simplicity Studio 5 also handled building the project, wrote the generated binary to the flash memory of the microcomputer, and measured the current consumption and voltages.

Another device we used was the smartphone, commonly referred to as Central. Central ran the EFR Connect to display the data sent by Bluetooth [11]. In our first two experiments, we transmitted the pushbutton switch status and temperature sensor data from the development board to Central. By varying the distance between the peripheral and Central, we investigated the strength of the Bluetooth waves and observed the operation status of the projects.

The experiments performed using the microcomputer were conducted at a height of 123cm above ground level. As shown in this article’s cover photo, the experiment was conducted where the peripherals could be seen from the central location.

Figure 5 Configuration of the experimental setup

The first project is the Bluetooth version of the blinking LED, a common test performed when starting up a microcontroller board. For the experiment, we used a peripheral pushbutton switch and LEDs. As shown in figure 6, the LED icon changed to green when the pushbutton was pressed. 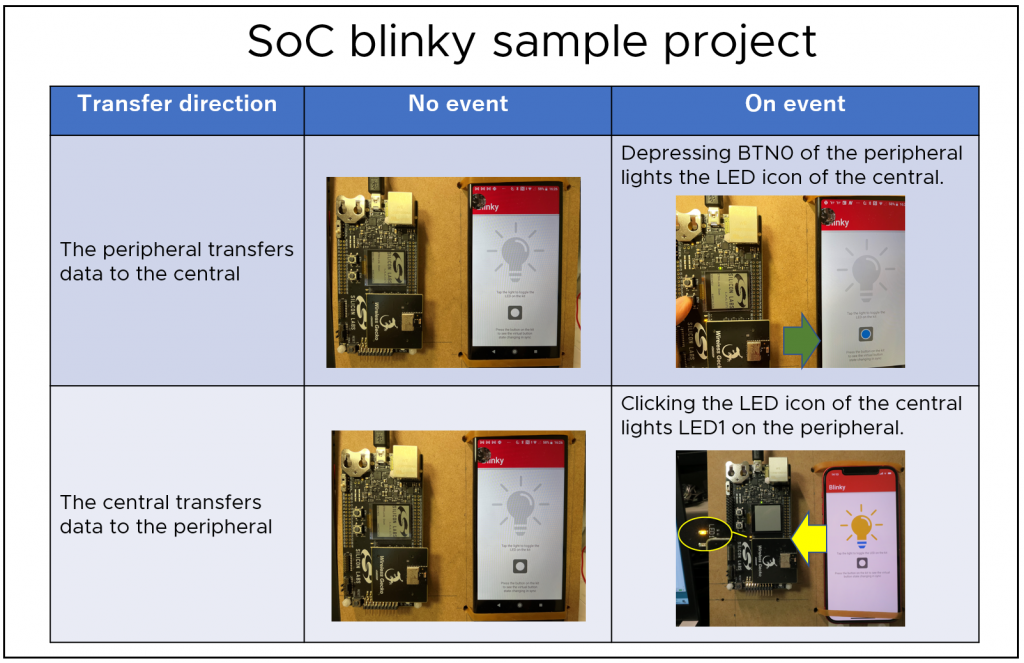 The distance between the peripheral and central station was then varied between 0.2m and 20m and the Received Signal Strength Indicator (RSSI) was measured. The maximum distance of 20m was due to the limitations of the environment. The RSSI received by Central in advertising mode is shown in Figure 7.

The graph includes a dotted line that shows the theoretical relationship where the signal strength is inversely proportional to the square root of the distance (free space propagation loss). The slope for the RSSI data seems to mimic this relationship to a high degree. 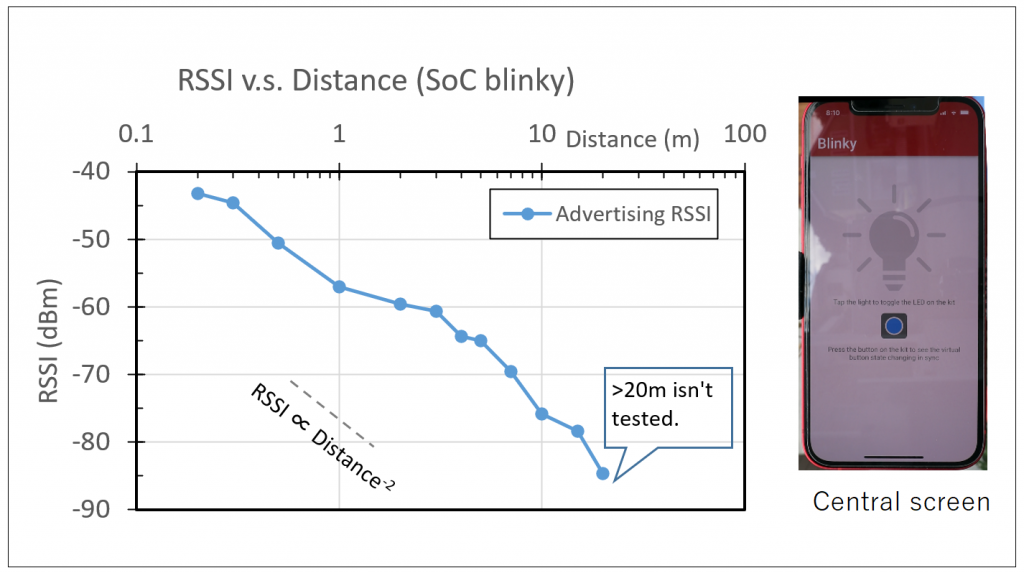 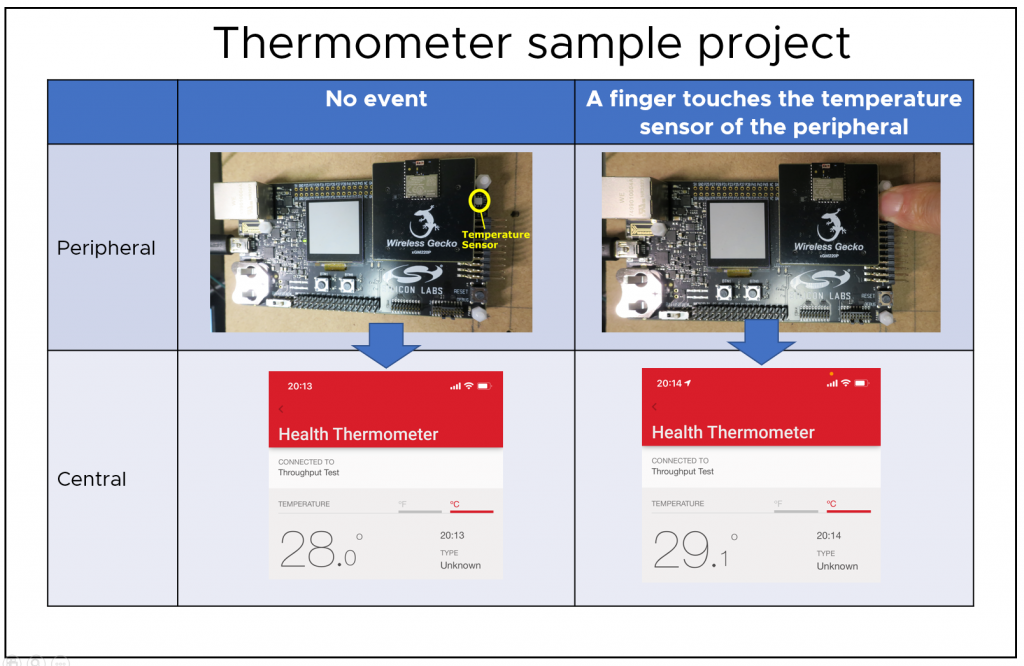 The main purpose of this project was to test how the RSSI of the temperature sensor changed as the peripheral was moved away from the central station. For this test, we varied the distance from 0.2m to 20m, as shown in figure 9. Looking at the graph we can see that the RSSI in the Advertising and Connected states showed a similar trend. For both states, the connection was stable even at a distance of 20 meters. 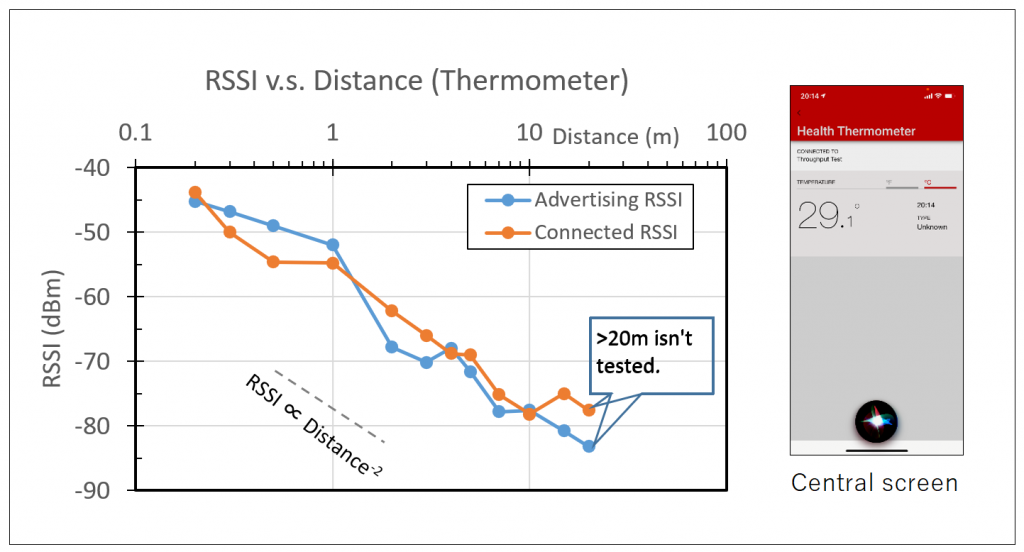 Figure 10 shows an example of data collected for current consumption and supply voltage for the microcontroller using the AEM function from Simplicity Studio 5. The horizontal axis shows the time (in seconds) for the past 10 seconds until the present time. The vertical axis represents the RSSI in dBm.

Taking a closer look at the time interval, we can see that from 10 seconds ago until 8.3 seconds ago, the peripheral was in the Advertising state. In this state, the peripheral is intermittently emitting radio waves in order for Central to find the peripheral. At around 8.3 seconds, Central found the peripheral, established a connection, and changed its state to ‘connected’. While in the connected state, temperature data was sent to Central every 4 seconds.

Looking again at Figure 10, the vertical axis represents two different variables, with current (yellow waveform) on the left and the power supply voltage (red waveform) on the right. The current consumption peaked at about 2.5mA, while in the Advertising state. The current then dropped to around 1.3mA in the connected state. We can observe that every time the peripheral transmits temperature data, the current spikes to around 3mA. On the other hand, the voltage remains constant at 3.3v the entire time because it was powered by USB from the PC. 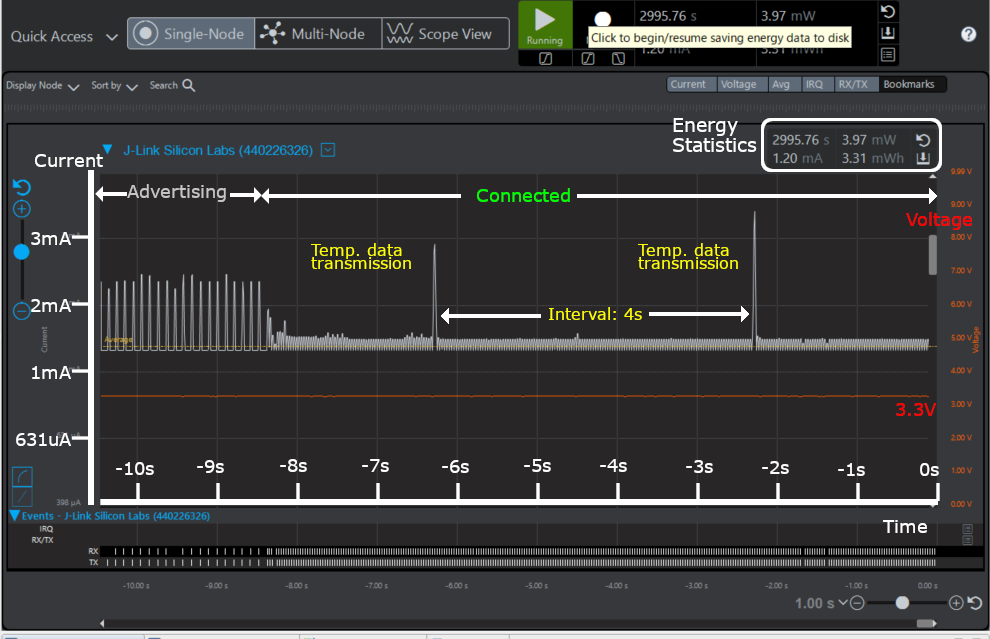 As we can see, the AEM provided detailed information about the current consumption and supply voltage of the Bluetooth Microcomputer. The AEM also ran in conjunction with various C++ functions. 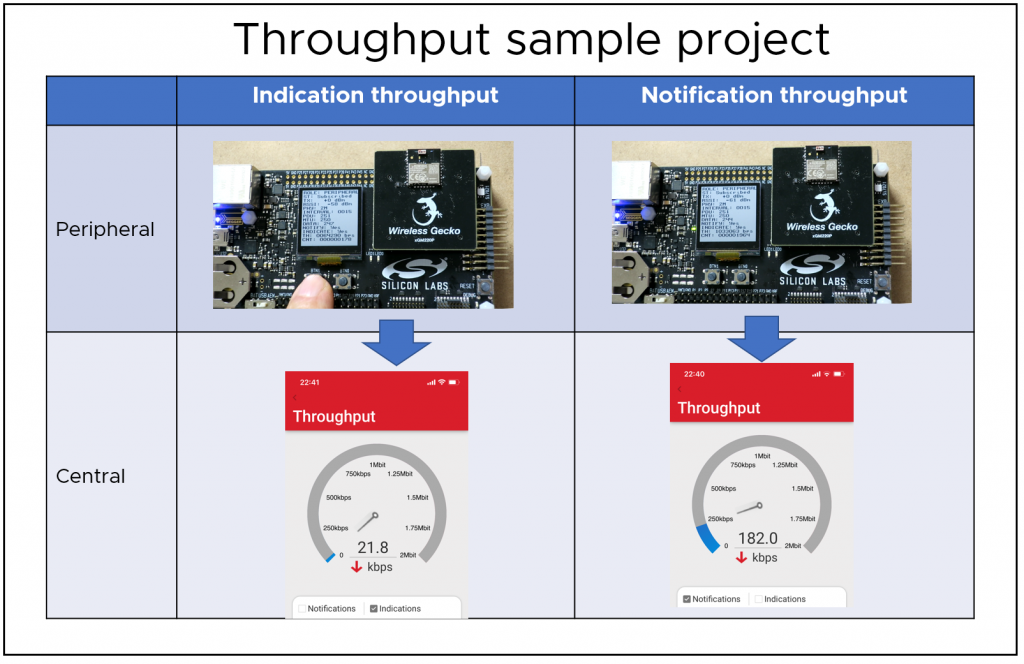 The second part of the project measured the throughput speeds as the distance between the peripheral and the central system was varied between 0.2m to 10m (Figure 12). The results show that even at a distance of 10m, the throughput was stable for both the indication and notification protocols. For this project, distances greater than 10m were not tested. 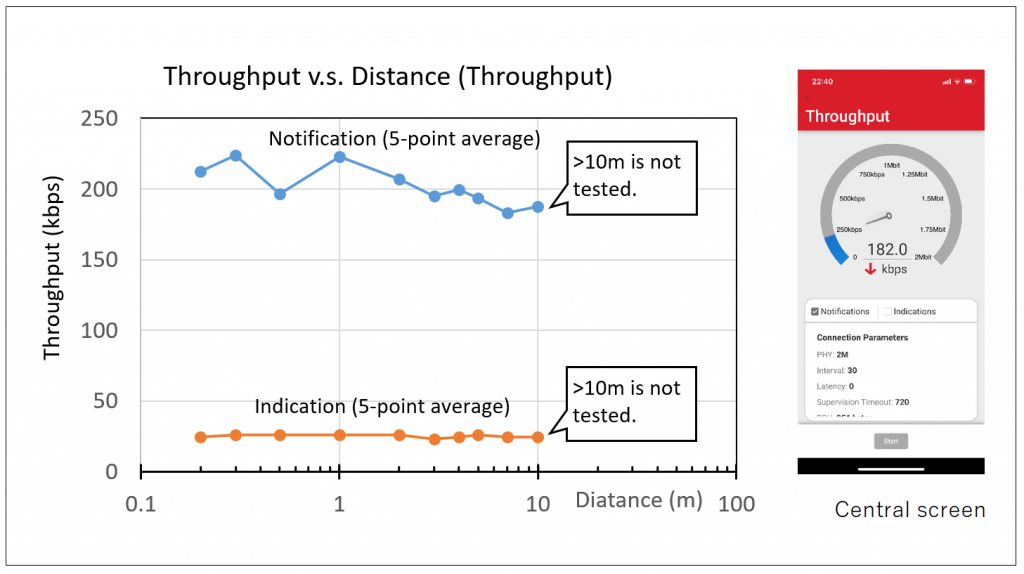 Thank you for taking the time to read the latest volume of Edge AI Evangelist’s Thoughts. I hope that you enjoyed today’s topic, and I will continue my talk about microcomputers in the next volume.