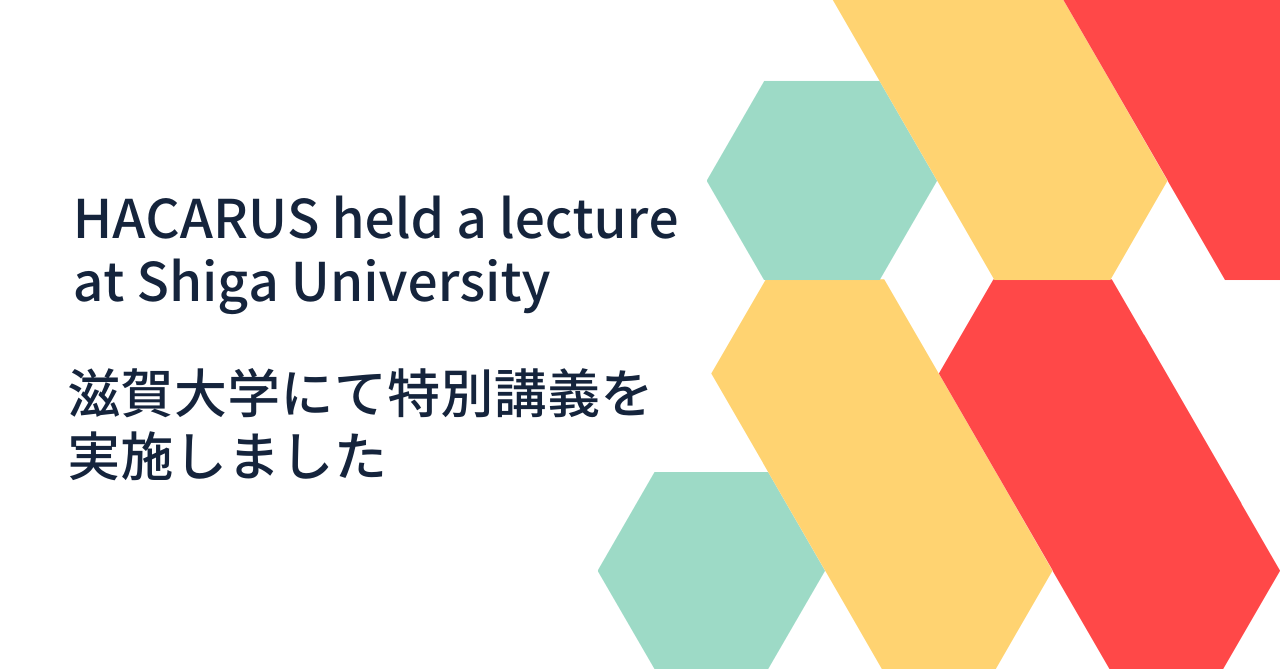 As the first university in Japan to establish a data science department, Shiga University holds a special significance to the data science community. The undergraduate program was established in 2017, while the graduate program was established in 2019. The school aims to “contribute for social development to nurture excellent personnel who leads the optimal decision-making based on the data utilization for the society in the future.”

Continuing from the previous sessions, the lectures were taught by HACARUS’ data scientists Shohei Mishima and Toyokazu Sekiguchi with the title “Characteristics of Sparse Modeling and its Applications”. The lectures were supervised by Professor Kaoru Kawamoto at Shiga University (also Academic Advisor at HACARUS). The day consisted of four 90 minute online lectures using presentations as well as 5 hands-on activities. Overall, around 20 students participated in the lectures.

In the real world, it’s not unusual that seemingly large and complex data is actually influenced by only a few factors. One of the main advantages of Sparse Modeling, a core technology at HACARUS, is its ability to effectively find these factors, even with limited amount of data. Both of the lecturers work with Sparse Modeling technology on a daily basis, and they infused their passion for the subject into their presentations.

The first half of the lectures covered a basic introduction to Sparse Modeling. After building a solid foundation, the topics then shifted towards explaining the algorithms used in Sparse Modeling. These included the fundamental algorithm ‘lasso’ and its more comprehensive variant, ‘generalized lasso.’

In previous visits to Shiga University, the lecturers introduced several analytical methods during the hands-on sessions. This time, they demonstrated how to analyze the same data sets using Sparse Modeling. As a result, the students were able to see how different information can be obtained from the same data utilizing various different techniques and methods.

Below are several comments received from the students about their experiences.

The lecture was a nice refresher course on the fundamentals of sparse modeling. It was really comprehensive and the hands-on activities were really practical.

I found it valuable to have a combination of introductory-level explanations and real-world application examples. This style has helped motivate me to learn more about sparse modeling. Before this lecture, I was a bit confused about how to connect the ‘concept’ of sparse modeling and the ‘algorithm.’ This lecture was a great bridge between them.

Sparse modeling is a profound subject and the lectures covered only a small fraction of it during these classes. Hopefully, by attending these lectures, the students have gained an interest in Sparse Modeling and will continue their studies in the future.

The data scientists at HACARUS have a wealth of knowledge when it comes to Sparse Modeling, and they are always excited to share it with students. HACARUS aims to continue giving back to the community and educational institutions, using its expertise and passion on data science through lectures and seminars.

To learn more about this article or to request a guest lecture, contact us at pr@hacarus.com.