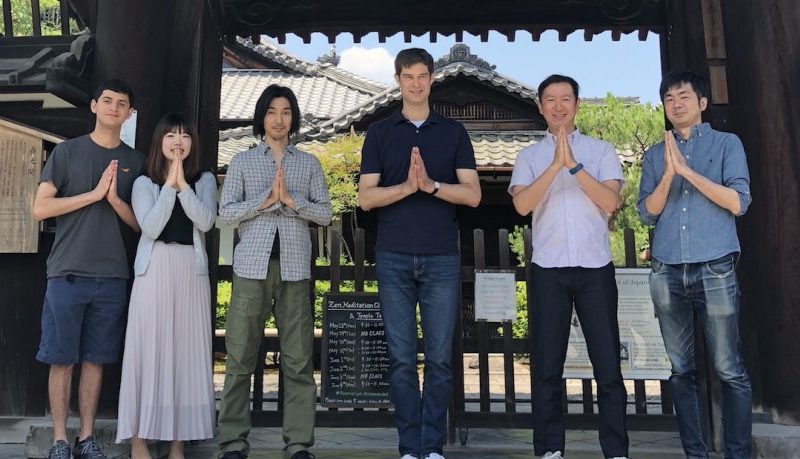 Our team went to a second Zazen experience, this time at Shunkoin Temple in Ukyo-ku. This temple stands in an area with many other temples, it’s easy to get lost there.Mr. Someda’s Google Map has stopped to navigate him on the way.

At Shunkoin Temple, all Zazen lectures are held in English. Most of the participants are from overseas.

Mr. Kawakami, a monk, learned about religion studies and religious conflicts when traveling to the United States after graduating from high school. After returning to Japan, he went for training at a temple in Miyagi prefecture and returned to Shunkoin temple (his home) in 2006 to start to teach Zazen in English. 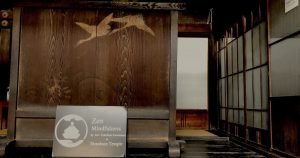 We learned at the beginning of our class, that “When judging something, we add our experience and prejudice to objective facts”.

When entering, cushions were arranged at the front of the Japanese style room (wa-shithu). There were also some chairs at the back of the room.Most participants sat on the cushion in a cross-legged position and waited for the class to start.

Mr.Kawakami, the monk and teacher, came into the room and said「Why you are in a cross legged position? Is this way of sitting the most convenient for you?」

Obviously we all had the preconception of “Zazen= sit cross-legged” and did that.However, it is not the easiest way of sitting, even for Japanese people. We are more  accustomed to sitting in a chair.

In everyday life, people usually judge things based on preconception and experience.Past experience, but also stories heard from other people or observed are important to deal with situations efficiently without having to think very hard, and even in order to avoid danger in unfamiliar situations.

Through experience, people create their own viewpoints and values (let’s call it “character”). Over time, the character may change through different experiences.

The scientific understanding of “character” has not progressed and is still being discussed. A further clarification of the concept of “character” may also push technological innovation in the area of artificial intelligence. 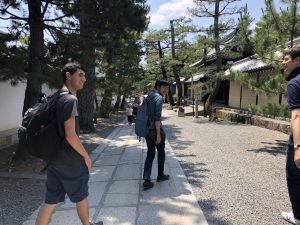 I was surprised by the quietness of the temple.The 20 minutes of meditation did not feel that long to me. We practice mindfulness every morning, so I might have naturally become used to it little by little.I was impressed that by practicing mindfulness, I was able to relax and concentrate. Though that is only half of the benefit, as meditation gave me the strength to face difficult tasks head on.

Today we started the work week in an unusual way. The entire team went to a temple In the west of Kyoto for a meditation class. The meditation class was set to begin at 9:30, luckily I arrived at the venue 30 minutes early and had some time to walk a bit around the large beautiful Hanazono areal, which includes around 20 temples.

For the meditation class we went to Shunkoin temple, a beautiful and  impressive building from the 13th century. The traditional architecture with the wooden walls and tatami floor always imposes a peaceful impression.

I really like the feeling of sitting on tatami matts, because of the natural feeling and smell. Outside the room we had a really nice view of a small Japanese garden.

For the first 10 minutes, the teacher, a monk, gave us a little lecture about the purpose of meditation – and that it’s, unlike believed by many, not about peace of mind and relaxation but about challenging one’s one perception about reality. This part was really interesting and I definitely want to learn more about it. 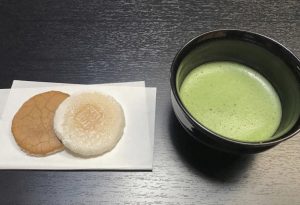 This Monday, June 4th 2018, I had the opportunity to visit Shukoin, a traditional Zen Buddhist temple with a history dating back to the 16th century. During the visit, I, as well as my co-workers at Hacarus, had the chance to take part in a meditation course. The experience was refreshing and allowed me the time and space to freely ruminate. After the meditation, Head Priest Takafumi Kawakami explained to us the meaning of trying to find self through meditation. He explained how our collective understanding of self was not yet cemented and still being discussed. This led to an interesting link between the concept of self and recent advancements and pushes in the sector of artificial intelligence. He also later showed us traditional paintings in the temple and explained the difference between the Eastern and Western forms of learning in which the East traditionally has pursued learning through a variety of arts and cultural traditions. On the other hand, the West has historically been more rigid in its pursuit of knowledge, usually in the form of textbooks and a more singular focus on a subject of study. Priest Kawakami’s words were very eye-opening in regards to the intersection between how meditation affects modes of thought and how these modes of thought affect the direction in which a company pursues its research or expansion.

We were later treated to traditional tea and sweets as a conclusion to the program. Overall, the program was beneficial in allowing me to clear my mind as well as opening myself to new ideas about ways to approach learning and the workspace. In particular, Hacarus’ embrace of both Eastern and Western philosophy in the workplace as well as the way in which we must actively be thinking about the interaction of AI in respect to both the company and to greater society were important lessons I learned. I would very much recommend visiting Shukoin or trying out meditation yourself if you want to get a fresh perspective on life!

Hello everyone, this is Tomomi Kikumoto, HR Manager at HACARUS. Today I would like to…

How HACARUS is Challenging the Tech Industry (2022 Edition)

Hello everyone, this is Naoki Kitora, Chief Technology Officer at HACARUS. As CTO, I have…

HACARUS’ Workcation Grand Opening! Why this Kyoto-based IT Company Chose to Open a Satellite Office in Shirahama

Hello everyone, this is Tomomi Kikumoto, HR Manager at HACARUS. Today I would like to…