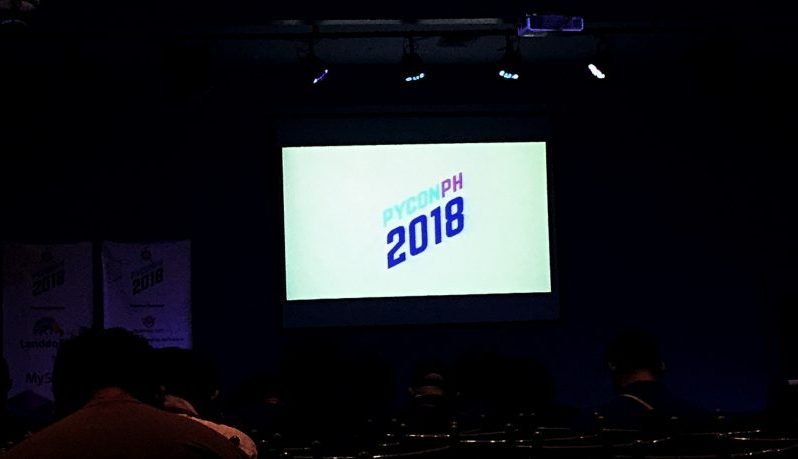 Last February 24-25, 2018, PyConPH2018 was held at iAcademy, Makati, Manila. It was an event were Python developers and enthusiasts all over Philippines gathered to share and learn.

As someone who has never attended PyConPH before, I had my own expectations and excitement. I usually attend meetups and events but only for mobile developers. So there was a part of me that is both excited and nervous. But as it turns out, I don’t have to be nervous and just be excited about this event! So here are five things I learned after attending PyConPH!

1. Listening to speakers who really know and love what they are doing is very inspiring

I can still remember how Erika Fille Legarda, the first keynote speaker, talked and shared her thankfulness to Python. She is a scientist and she uses Python on her research related to complex systems and agent-based modeling. She recalled how she once worked for several months for an implementation in C++ then turns out, she can do it same using just two lines of code in Python! The second keynote speaker is Al Sweigart, author of “Automate the Boring Stuff with Python”. He shared how Super Mario inspired him to be a developer. He also reminded everyone that it is never too late to start learning how to code. I love how he also gave tips on what to do in conferences like skip that talks and instead, meet new people in the hallway. He said that “The point of Pycon is to meet people”.The last keynote speaker was Younggun Kim, a board director of Python Software Foundation. He discussed the challenges of building communities in the Asia Pacific due to differences. 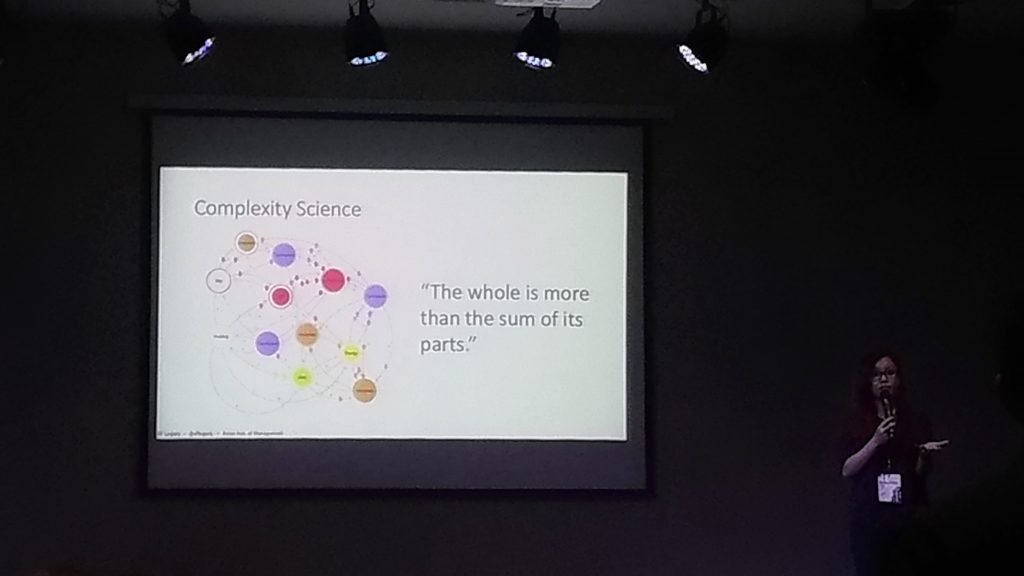 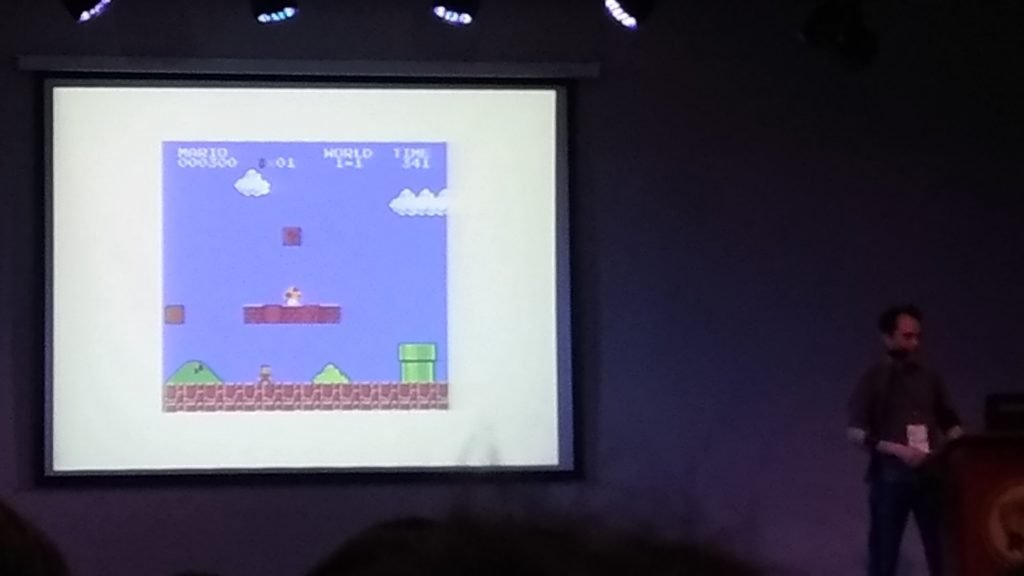 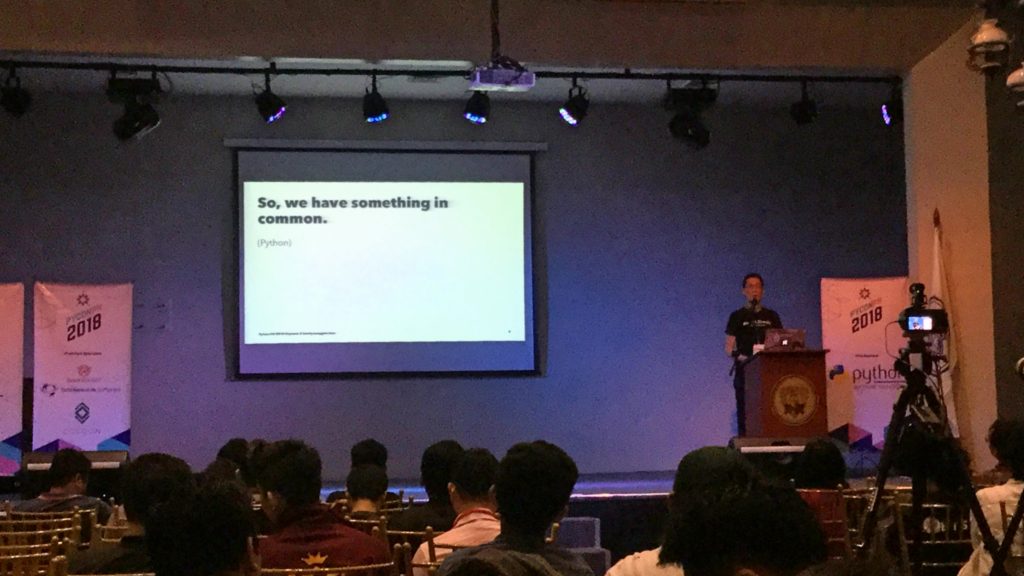 Younggun Kim, a board director of Python Software Foundation.

2. Python is for everyone!

As what Al Sweigart said that it is never too late to learn how to code, PyConPH prepared talks and sessions for beginners and people who want to learn more about Python.

A guy in a lab coat came up to the stage and introduced himself as “Mr. Valdez”. He taught introduction to Python in a way that even people who know Python really well will listen to him! He did it in a fun and very clear way. I think even a 5 year old will learn Python if he is the teacher!

Aside from the talks in the auditorium, there are “breakout sessions” as well that allowed participants to select a small group workshop or discussion. I joined Women Who Code’s “Hello World of Data” because first, I am really curious about the three-hour-workshop and second, I joined Women Who Code’s hackathon before and it was so much fun. The workshop was very informative and I didn’t even realize that it was already 3 hours! They taught the attendees about Jupyter Notebook, pandas library and how to make graph using Python.

On the second day, participants had the opportunity to talk about any topic within 5 minutes. Hacarus CTO, Takashi Someda did a brief talk about Sparse-modeling. Other participants showcased their Python applications and projects. And also, everyone got curious when 9-year-old kid went up the stage and flashed a Minecraft game on the screen. He introduced himself and demonstrated how to add things in the Minecraft world using Python. He even created a wall of TNTs programmatically! 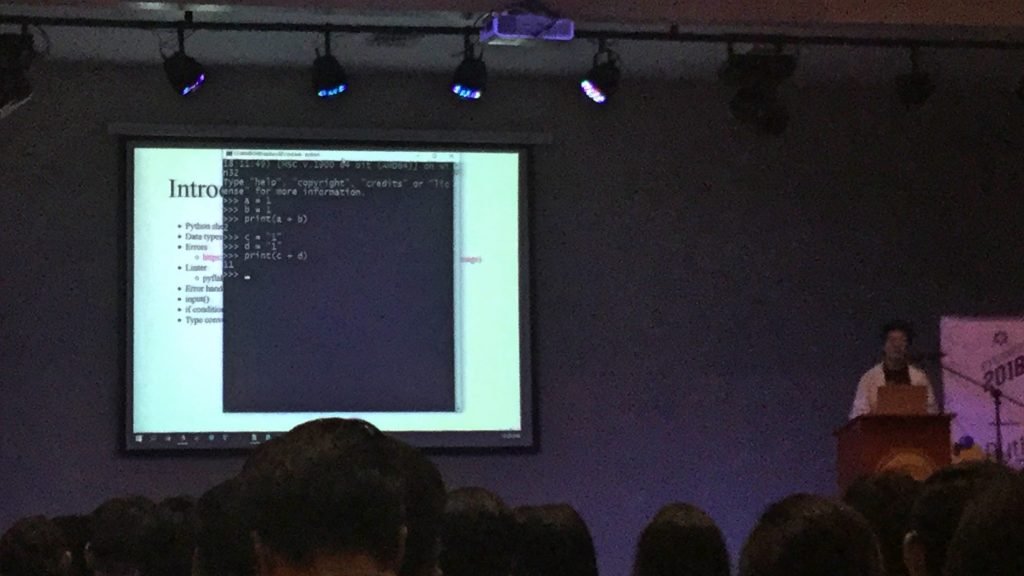 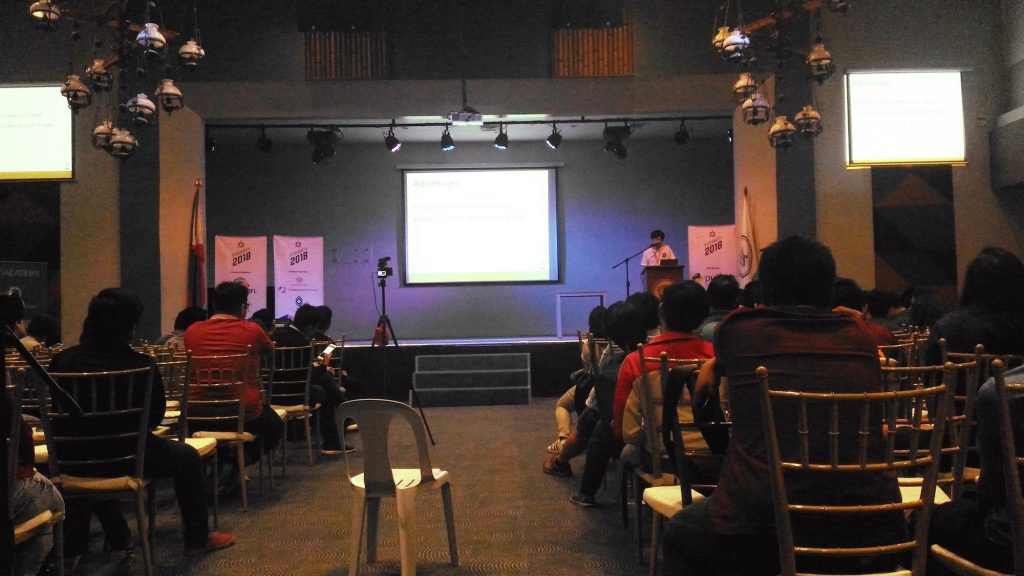 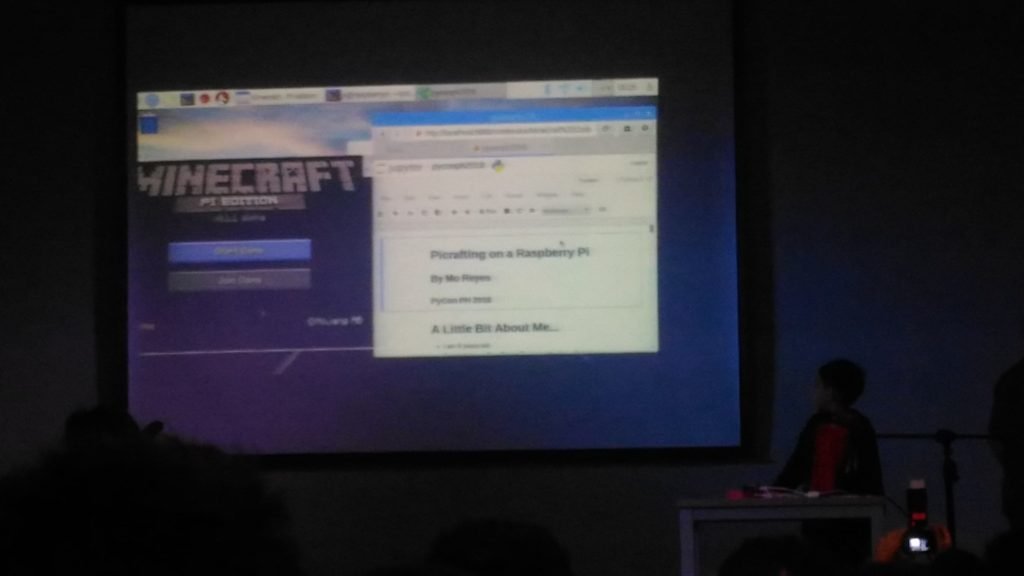 Uh oh! Don’t worry, I am referring to the Python Programming Language!

One of Hacarus’ developers, Nino Eclarin, talked about the problems in Healthcare and how and why we can use Python to develop solutions.

Other talks were about how to use Python in blockchain, AI, deep learning, creating music, creating video and even deep learned tweets from famous people to create a model! Unfortunately, some of these talks were done simultaneously with other breakout sessions so I was not able to attend. But really, Python is indeed everywhere! 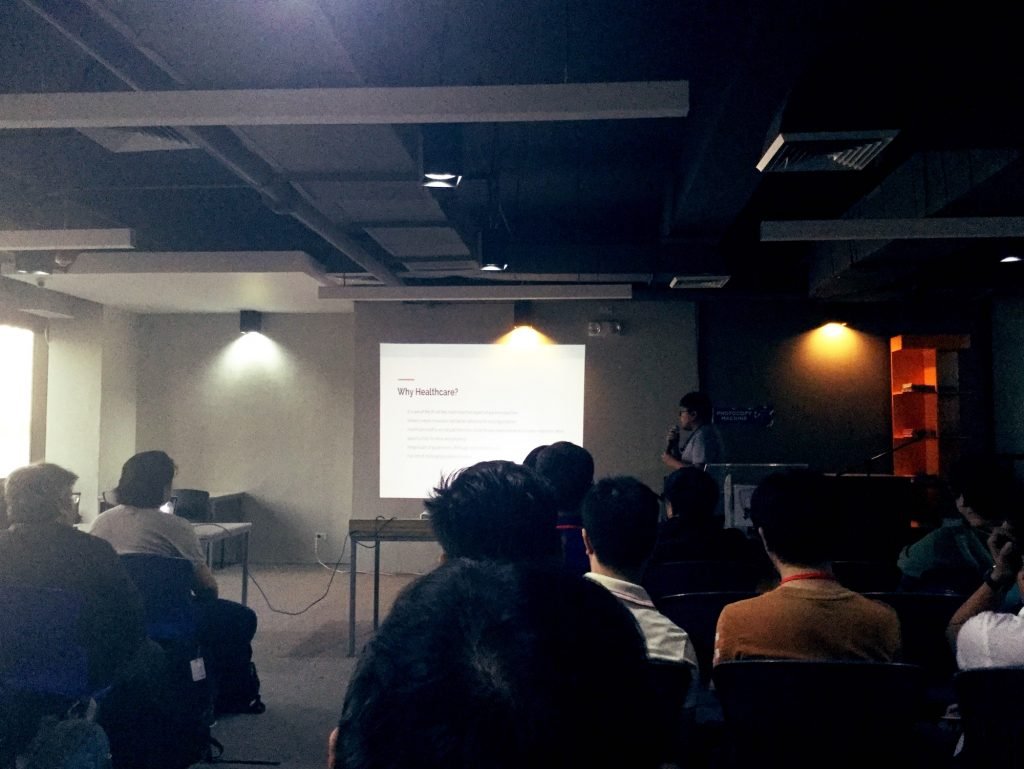 4. Meeting people here is as easy as printing “Hello world”!

I just realized that one of the goals of PyconPH is to allow participants to meet new people. During lunch, there are banners with topics on them like “Building Tech Communities”, “Social Media and Web”, “DevOps”, and even “Board games” and “Universe and Galaxies”. Participants can go around and sit on their groups and talk. Another cool interaction event was the exchanging of bookmarks. The Pycon loot bag contained stickers and two bookmarks of the same design. To get a different design, you must ask other people to trade bookmarks. Awesome idea, right? Also, classroom breakouts help you meet other people as well since it is a classroom setup. So asking questions and talking to your seatmate and speakers is easier.

5. Being part of a community who shares the same passion will help you grow.

The last part of the event was a panel discussion consisting of some of the conference speakers. You can ask them questions using the microphone in the aisle or by tweeting your questions. They gave tips to beginners, discussed how women is not very visible in the community, their experiences in PyCon and others. It was a very friendly discussion and you will realize that truly, one way to be like them is to meet people who share the same passion and goal. 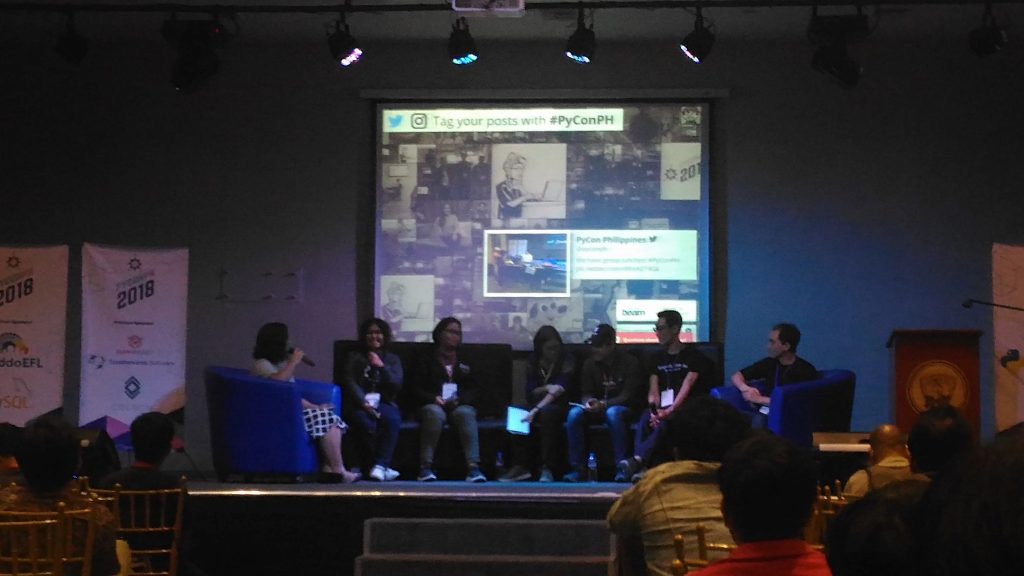 Panel discussion on the second day of the event.

So, given these 5 things I learned after attending my first PyconPH, see you next year?

Christine is a software engineer at Hacarus. She loves to travel and try new things. She firmly believes in the cliché saying that "Everything happens for a reason".