Since this is the first time, I’ll start by introducing myself.

From there, I started working at the Industrial Technology Research Institute of Taiwan in 2012, researching SoC design technology for wearable

s and then edge AI – this eventually led me to join HACARUS in September 2019.

Currently, I am in charge of technical thought leadership and customer development for edge AI at the Tokyo R&D Center, which opened in October 2020.

In this fist blog, I thought about the implications of this acquisition of Arm by NVIDIA.

We’ll start by unpacking the “benefits of Arm”.

From the perspective of an SoC (microprocessor, a large scale IC that integrates various functional blocks) developer, there are two major advantages to using Arm.

SoC development is a bit like a patchwork. For each patch, we need to prepare the microprocessor core, GPU, on-chip memory, peripherals (USB, PCI-express, etc.), and interconnects to communicate between patches. On-chip memory, interconnects and other IP licenses are available on the Arm platform. Third parties can also make their IP and software business on the Arm platform.

In addition, design tool vendors, which are essential for SoC design, also provide design tools to ensure smooth handling of Arm’s IP. In other words, there is an ecosystem (Arm Economic Sphere) built around Arm, which is a major attraction of Arm.

Next, let’s look at it from the perspective of the semiconductor manufacturers NVIDIA, as it is well known, is the leading manufacturer of GPUs; their business is to sell NVIDIA-branded semiconductors.

What about neutrality from the semiconductor manufacturers?

In the press release, “NVIDIA will expand Arm’s IP licensing portfolio with NVIDIA’s technology while maintaining Arm’s open licensing model and neutrality” is mentioned however, NVIDIA is definitely one of the upcoming semiconductor manufacturers, so it will be interesting to see how it comes to terms with Arm’s neutrality from other manufacturers. The SoC CPU used in the Jetson Xavier NX Developer Kit is a 6-core NVIDIA Carmel ARM®v8.2 64-bit CPU 6 MB L2 + 4 MB L3. This appears to be NVIDIA’s in-house implementation of the Arm instruction set (designed for micro-architecture and beyond).

Which new Arm IP will NVIDIA be using? Is this Arm’s signature low-power IP? Enter RISC-V

RISC-V, an open microprocessor architecture alternative has recently gained traction. Unlike many other instruction sets, the RISC-V instruction set is open source, with license fees and royalties available at no cost.

Another feature of RISC-V is that the instruction set defines custom instruction extensions from the beginning, making it easy to develop dedicated processor cores for specific applications, making it an attractive alternative to industry-standard CPU cores such as x86 and Arm. An example of a company that’s started using RISC-V is Western Digital, that has announced that the controller of their HDD and SSD will be based on RISC-V, and there is also news that NVIDIA installs its own CPU based on RISC-V as the controller of the future version GPU which was prototyped.

If you are interested in learning more about RISC-V experiments done by HACARUS, we have succeeded in running Lasso, a sparse modeling algorithm, on a RISC-V-based board HiFive Unleashed (RISC-V). See the HACARUS Engineer’s article if you’re interested. 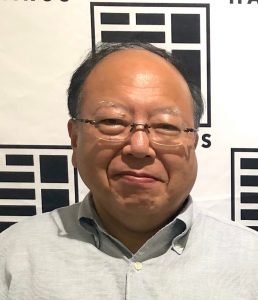 Graduated from Keio University with a master’s degree in engineering, and joined the Semiconductor Division of Tokyo Shibaura Electric Co. in 1977, where he was involved in the design and development of the Emotion Engine, the CPU of Sony PlayStation2 and the CELL processor of PlayStation3.

Since 2012, he has been engaged in research on SoC design technology for wearables and edge AI at the Industrial Technology Research Institute (ITRI) in Taiwan.

He joined Hakarsu in September 2019 and is currently in charge of edge AI technology information dissemination and customer development at the Tokyo R&D Center, which opened in October 2020.