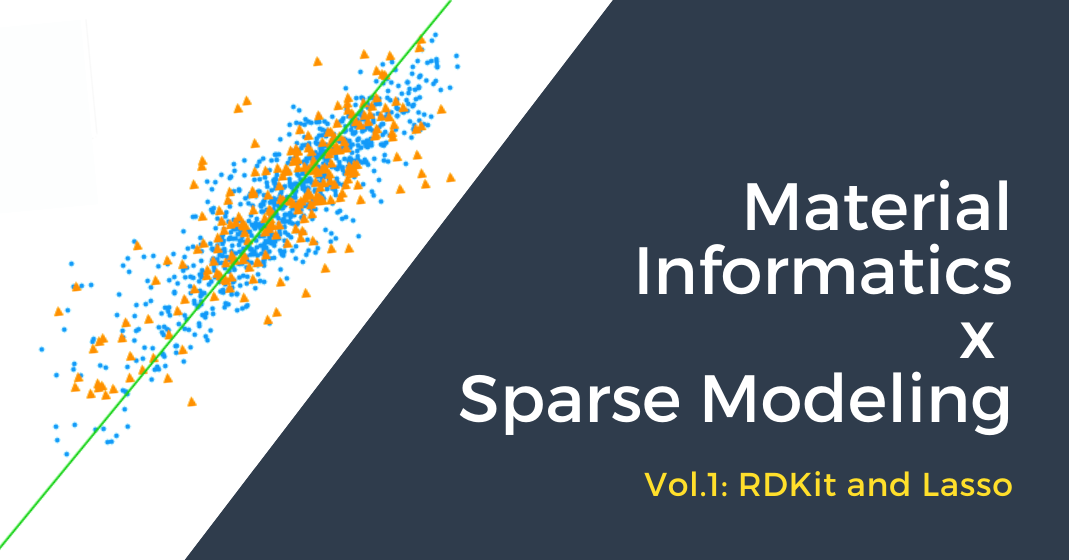 Hello everyone. This is Unseo, a data scientist here at HACARUS – today I will introduce some of our latest work in bringing our technology to bear in the field of Material Informatics.

HACARUS provides solutions that emphasize “why?” of the process utilizing sparse modeling, in addition to “prediction” that has been performed by conventional machine learning.
Analysis using sparse modeling is also very suitable for application in the fields of drug discovery and material development.

Today, I would like to introduce an example of sparse modeling application to a simulated problem in materials informatics.

What is Materials Informatics (MI)?

Material development takes a lot of time and effort – to make a substance with the desired properties, we need to repeat actions such as the following:
1. Predict necessary materials and methods using theory and empirical rules.
2. Make an experimental plan.
3. Actually create the material.
4. Test if the desired properties are obtained.
5. If it doesn’t work, start over.

However, due to recent improvements in computer performance, it has become possible to predict physical properties and functions by machine learning using simulations and large amounts of data with high accuracy.
This has led to the establishment of fields such as MI and chemoinformatics. MI is particularly focused on material development.
​
Furthermore, MI using machine learning has been gaining momentum in the recent years.
Until a while ago, the mainstream way to perform simulations was by using quantum chemistry calculations on supercomputers. However, simulating all of the huge number of candidate substances requires an unrealistic amount of calculation even with supercomputers.

The application of sparse modeling to MI makes a lot of sense.
With “conventional” machine learning, it is usually difficult to understand why the prediction model made a prediction, even if the model’s prediction performance is good.
With Sparse modeling on the other hand, we can extract the essential elements from a small amount of data, and can estimate what are the important factors for prediction.

For detailed information about sparse modeling and Lasso, please see this article (in Japanese) “Why was sparse modeling born? Introducing the representative algorithm” LASSO “”.

When applied to material development, Sparse Modeling can make it easier to establish guidelines for the next substance to be tried by understanding the factors that contribute to the desired properties.
Therefore Sparse Modeling contributes to performing experiments more efficiently.

In the next section, we will predict the solubility of various molecules in water using the Lasso regression, which is a typical example of sparse modeling.
Then, let’s look at the results of structural analysis of the important factors for the prediction.

​For this experiment, I referred to Chapter 9 of the book “Practical Materials Informatics” [1].
The book explains everything from programming such as how to use Python and the computer chemistry library RDKit to machine learning, Bayesian optimization, and problem solving in actual MI.
On the Support Page, the code actually used in the book is published, so you can download it and run it in your own environment.

We used the open data called ESOL [2].
It records 1128 molecular structures (SMILES) and logP (octanol water partition coefficient), which is an index of water solubility.
We will now create a feature of this data from chemical structure (SMILES) only and create a Lasso model that predicts logP.

Using RDKit, which is also used in the book [1] introduced earlier, we created a feature called Morgan fingerprint from the chemical formula. Morgan Fingerprint expresses the partial structure of a molecule as a binary vector.

For example, if the bit corresponding to the hydroxy group is the third bit, the vector of the substance having the hydroxy group can be expressed as (0, 0, 1, …). This article uses a 4096-bit Morgan Fingerprint, so you can write up to 4096 substructures.

(The figure is taken from the reference[3] p.4)

We will divide the data to evaluate the training model correctly later. 80% of the original data was used as training data to train a Lasso regression model that predicts logP from the Morgan Fingerprint of each molecule.

In other words, it is a model that predicts its properties only from the structure of the molecule. A simple model like Lasso is attractive because the learning is done quickly. In fact, on my Macbook (CPU: Core M, memory: 8 GB), one learning is completed in 1.26 seconds.

As a result of predicting with the trained model from the remaining 20% of the data not used for training, the R2 score was 0.723.

R2 Score is one of the evaluation indexes for the regression model, the closer it is to 1, the better the performance. It is said that it is not so predictable if the R2 score is less than 0.6, and it is better to suspect overfitting if the score is larger than 0.9, so I think it is reasonably accurate.

The following figure is a scatter plot when the horizontal axis is the measured value of logP and the vertical axis is the predicted value. The closer each point is to the green line, the better the prediction value, and it can be seen that the prediction is particularly good even for unknown data (Test). 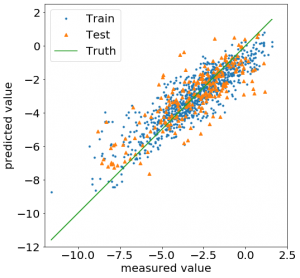 Why Lasso can explain predictions

One of the major characteristics of Lasso regression is sparsity. To make it easier to understand, let’s compare with Ridge regression, which is a similar linear regression model to Lasso.

The following figure shows the magnitudes of the regression coefficients of Ridge regression and Lasso regression side by side and plotted. (Drawn in 1024 bits for clarity) 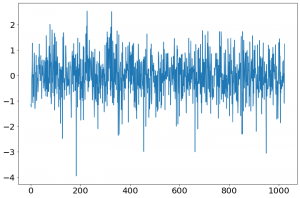 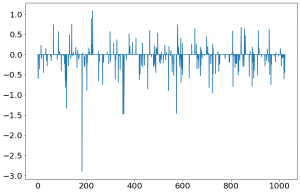 Next, let’s look at the result of selecting 10% in order from the one with the largest absolute value (= important one) of the Lasso regression coefficient. 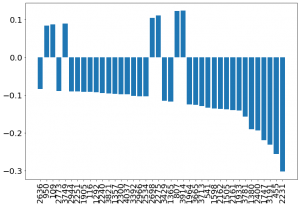 Now you might be thinking – what kind of structure do these bits specifically refer to?
RDKit allows you to visualize the substructures that correspond to the assigned bits.

Among the partial structures of the substance 5- (3-Methyl-2-butenyl))-5-ethylbarbital, the partial structures that greatly contribute to logP have bit numbers of 807 and 950 and coefficients of 0.58 and 0.13, respectively.
Bit number 807, which is common to all three substances, is possessed by many different substances and is considered to be a fairly important factor because of its relatively large coefficient. 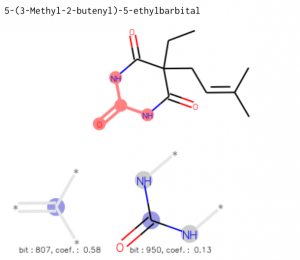 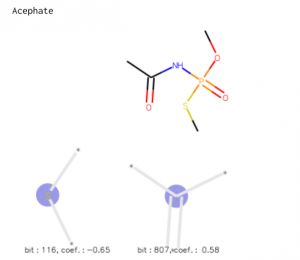 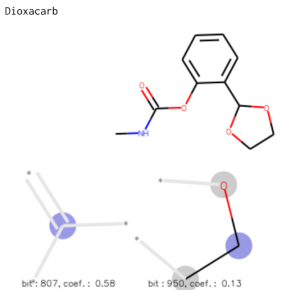 As introduced in this article, a simple and highly interpretable model like Lasso is key to providing human-friendly results, which makes it easier to conduct the validation process by experts.

Lastly, analysis using machine learning, like this one may contain major chemical mistakes and surprisingly good results.
Its authenticity cannot be determined only by us data scientists, but it can provide analyses that can streamline experiments.

​
If you have technology and data for material development, but don’t know how to use the data, HACARUS may be able to help.
For more information on using our expertise for your development projects, please contact us here.