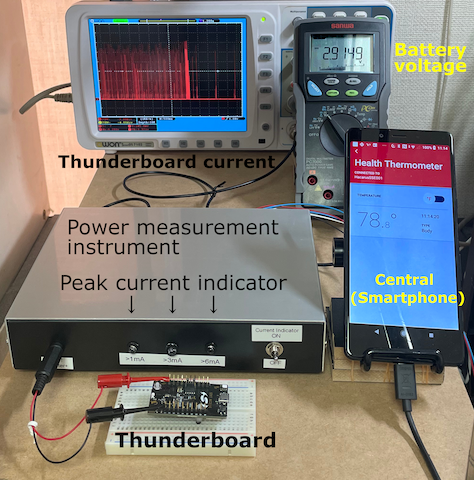 Previously in volume 15 of the Edge AI Evangelist Thoughts series [1], I explored using a Bluetooth Low-power Thermometer program using the ‘Thunderboard’ by Silicon labs [2]. In this volume, I want to pick up where I left off and talk about measuring the battery life of the same program. To obtain accurate results, I ran the battery for more than a month until the battery died.

In volume 15, I discussed my experience with measuring the average current of the Thunderboard by varying the advertisement interval. To calculate the estimated battery life of the CR2032 (220mAH) unit, the battery capacity was divided by the average current. The results are plotted in Figure 1.

As a quick refresher, the advertising interval refers to the time where the Thunderboard starts emitting radio waves to request a connection. Looking again at Figure 1, for example, when the advertisement interval was set to 0.05 seconds, the battery life was estimated to be 43 days. To demonstrate the importance of the advertising interval, when it was raised to one second, the battery life drastically increased to 765 days. 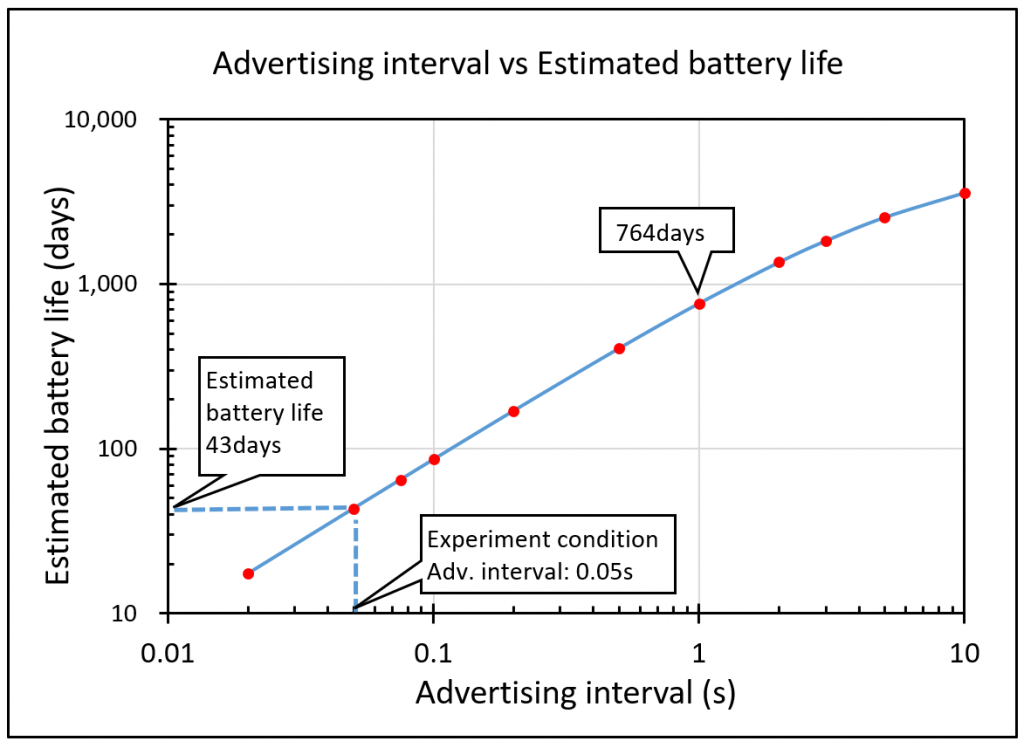 The Keysight N6705B DC Power Analyzer is a highly accurate and functional device, but it comes with a steep price tag ranging from several hundreds of thousands of yen up to one million yen (depending on the configuration). In this experiment, I used a low-cost self-made measurement device that was adequate for our needs.

When taking measurements, it is important that the measurement device doesn’t affect the target object in any significant way. One example is a digital tester or multimeter that can be bought for a few thousand yen. The input resistance of the voltage measurement range is about 1Mohm to 10Mohm. When this multimeter is connected to the battery, a current of about 3uA flows into the device.

Since the minimum current value of the thunderbird to be measured is 1.5uA, this essentially means that twice as much current flows into the multimeter compared to the target device. This also means that the battery life cannot be measured accurately because the internal resistance for the current inside of the multimeter is high, making it difficult to obtain accurate measurements.

To combat this issue, I built a low-cost power measurement instrument, shown in figure 2, that could measure voltage and current while having no effect on the Thunderboard’s current and voltage consumption. While it was not as accurate and versatile as the Keysight N6705B, it used a voltage follower for voltage measurement and an instrumentation amplifier [4] for current measurement.

Looking at the numbers, the extra current due to the power analyzer was kept below 0.06% of the minimum Thunderboard current of 1.5uA. The voltage drop due to the current sensing resistor was also kept below 0.43% of the battery voltage. Glancing at Figure 2, the buffered battery voltage was output to Vref, and the converted and amplified current value is output to Vcur.

Vref and Vcur were also separated from the circuit via an OP amplifier. Because they were low impedance signals, they also could be connected to an oscilloscope or digital tester for stable measurement. The performance of the power analyzer is shown in Table 1. 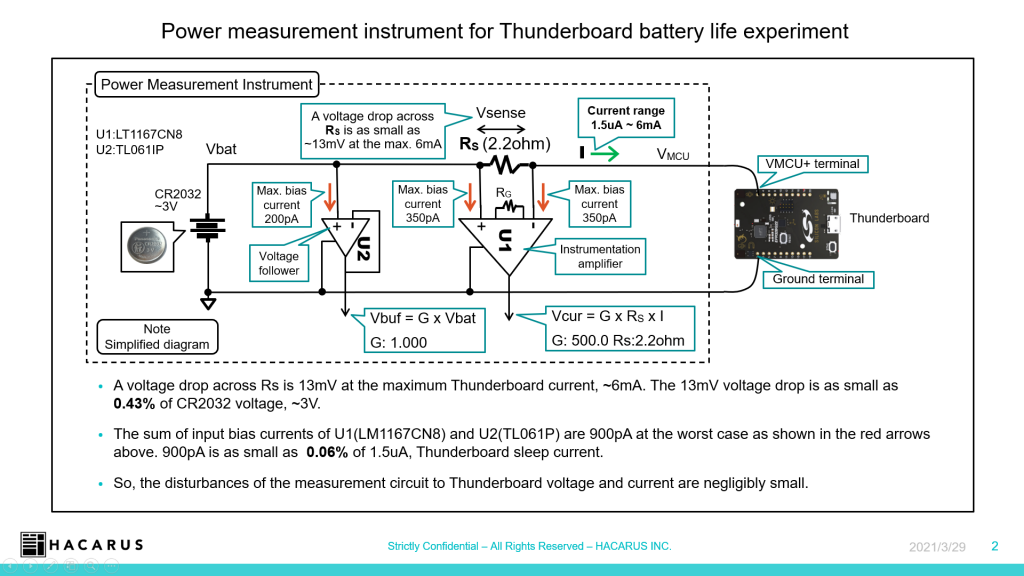 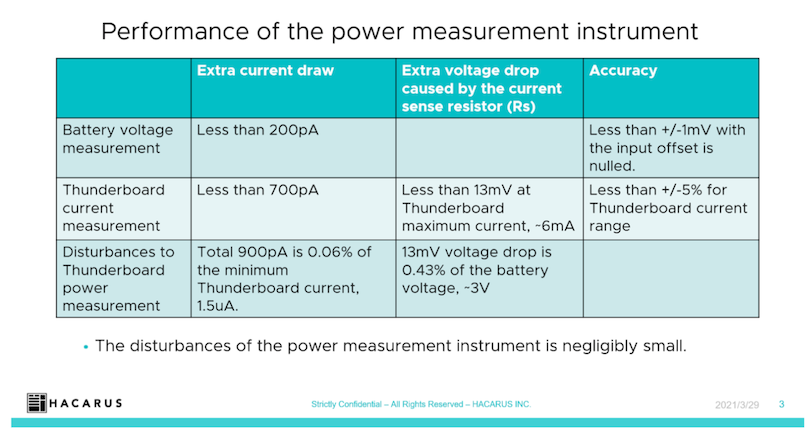 For the experiment, the operating current consumption range of the Thunderboard varied between 1.5uA to 6mA. The accuracy of the current measurement circuit is shown in Figure 3 which was within +/-5%. This level of accuracy is sufficient for this experiment. 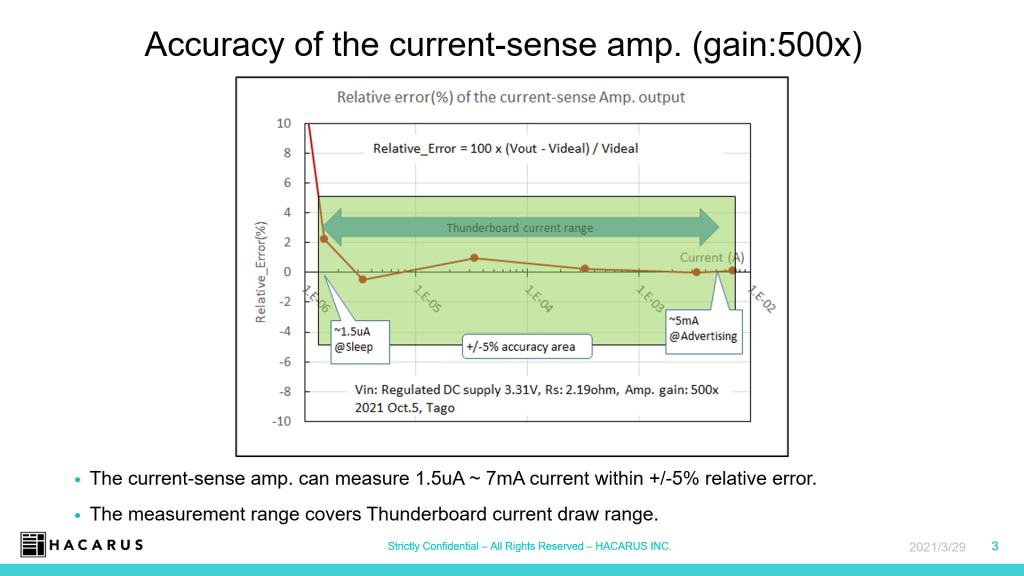 Figure 3 Accuracy of the current-sense amplifier

Moving on, I will next explain the experimental procedures.

Preparing the Thunderboard and Central 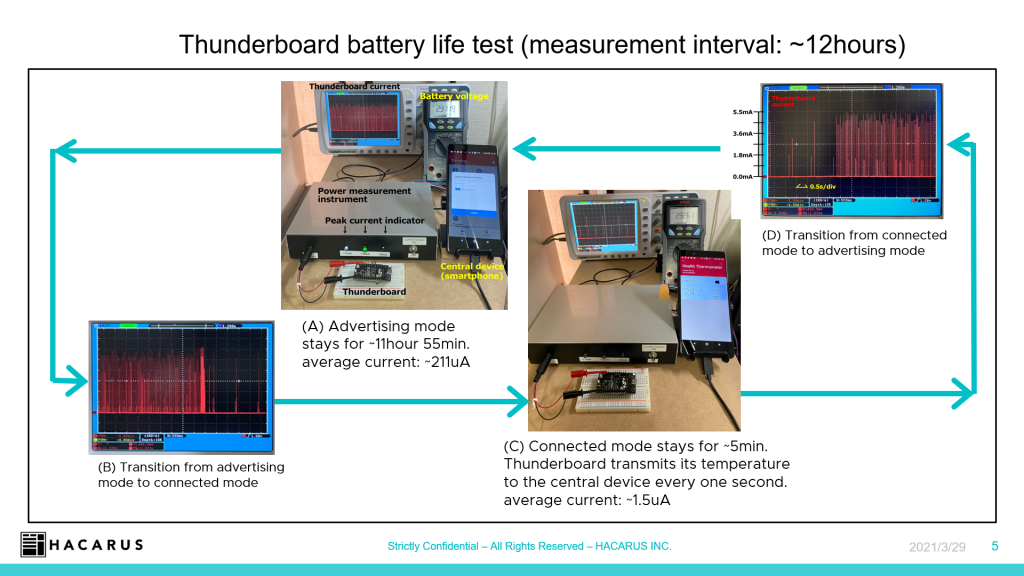 After finishing the data collection, I created the plot for the results shown in Figure 5. Looking at the plot, the battery voltage appeared to stay relatively constant and eventually began to steadily decline. However, at around 37 days and 20 hours, the voltage suddenly dropped to 2.20V and the Thunderboard stopped operating. In other words, this was determined to be the battery life for this experiment.

Going back to the theoretical battery life of 43 days shown earlier in Figure 1, this result of 37 days and 20 hours shows that the battery life estimation model is reasonable. Carrying this experiment over to real-world applications, if we set the advertisement interval at 1 second, we can expect a battery life of more than two years. I can personally think of many smart edge devices that could operate under these conditions for more than a year while using a single coin cell battery to power it. 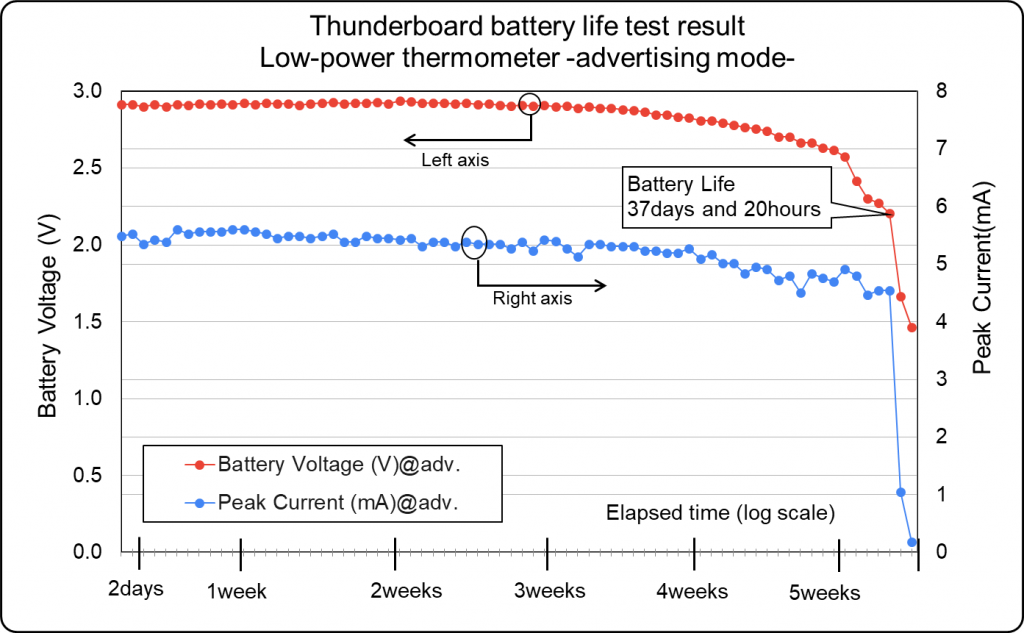